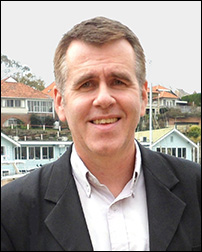 Wildie has been closely involved with the Document and Information Management (DIM) industry since 1996. He is widely recognized for his leadership and contribution to the industry in the Asia-Pacific region. In addition to his role with K-2 Partners, he is the majority shareholder of Lane Archives Indonesia.

From 1996-2006 he served in multiple roles with Recall Information Management, including Country Manager of Recall Thailand, Taiwan, Hong Kong and India. He was a member of the Executive Committee of the Recall Singapore Joint Venture. He also held regional roles covering Operations, Risk Management and Systems Integration. During his time with Recall, Wildie played an integral part in eight acquisitions and in most cases headed up the integration of those businesses into the Recall system.

In 2006, he acquired the majority stake in the Lane Archives Indonesia business. He served in the role of General Manager for four years as the business grew at a rapid pace. In 2010, he returned to Australia and has since completed a number of consulting assignments for a variety of clients both within and beyond the DIM industry sectors in Australia, the US, Saudi Arabia, the Philippines and other countries.

Wildie has extensive professional relationships within the DIM industry throughout the Asia-Pacific region. He knows all major potential purchasers as well as most of the independent business operators. He understands business valuation methodologies as well as the M&A process. Most importantly, he has the necessary DIM business experience and know-how to help sellers prepare their businesses for sale and achieve maximum valuations.

Wildie has been a member of the PRISM Asia-Pacific Advisory Council and its predecessor organizations since its founding in 1999. He currently serves as the Council’s President and has led the organization for more than half of its existence. He has organized and spoken at multiple industry conferences and workshops and he is a repeat winner of the ‘Volunteer of the Year’ award. In 2013 he was elected to the Board of Directors of PRISM International.

Wildie holds a Bachelor of Business degree from the University of Technology in Sydney, majoring in Accounting. He is a Chartered Accountant accredited by Chartered Accountants Australia and New Zealand. He also speaks a number of Asian languages with varying degrees of proficiency.